When and how does Ayurveda appear?

Ayurveda is the first human medicine. It originated in India and influenced healing practices of the entire Ancient World. Many of its methods were adopted by Chinese, Tibetans, Persians, Egyptians, Ancient Greeks, and Romans.

Ayurveda has accumulated enormous medical knowledge LONG BEFORE THE BEGINNING OF THE NEW ERA. It might sound shocking to the Western World nowadays but the Ayurvedas used to perform eye operations and organ transplants thousands of years ago. 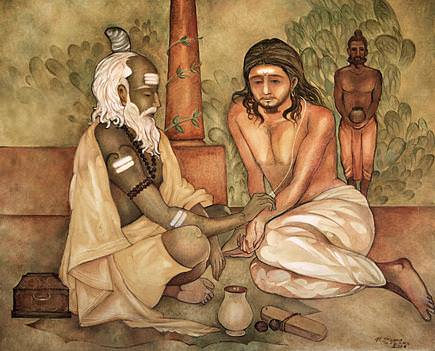 This is described by eminent wise men and healers in ancient texts which we find and which are similar to actual medicine textbooks - including types of diseases, remedies, surgery, etc.

It is impressive that being so ancient Ayurveda still has eight medical directions which are very similar to those of contemporary allopathic medicine.

KAYA CHIKITSA is dedicated to general physiological diseases of the body and corresponds to Internal Diseases. It is shaped as a systematic science and practice about the second century BC in the compilation book Charaka Samhita. The latter consists of 8 volumes of treatises dedicated to different medical aspects.

On the other hand, as far back as in the 6 century BC the treatise Kasyapa Samhita described BALA CHIKITSA - the analogue of contemporary western Pediatrics. GRAHA CHIKITSA corresponds to modern Psychiatry.

SHALYA CHIKITSA is surgery and is described in the treatise Sushruta Samhita, including surgery training and description of tools and procedures. The majority of the researchers date the collection at the 6th century BC but according to some studies it has earlier prototypes.

URDWANGA CHIKITSA corresponds to Otorhynolaringology but it also includes eye, head and neck diseases. DAMSHTRA CHIKITSA is the analogue of Toxicology. In the remote Antiquity Ayurvedas also had Reproductive Medicine - VRISHIA CHIKITSA. JARA CHIKITSA is a separate branch of Ayurveda dedicated to the diseases of the elderly and the prevention against ageing known in allopathic medicine as Geriatrics.

What do we need to know about Ayurveda?

Ayurveda is medicine system which can heal every disease. However, Ayurveda medicine is part of a bigger entity, a universal science. It includes a vision on the creation of the Universe, nature, human being and their relations. That includes lifestyle, life views, perceptions, vital attitude, self-esteem, and attitude towards others.

Given that, in Ayurveda treatment the patient plays an important part and must have positive attitude, give up bad habits that provoked the disease, follow strictly the prescriptions given to him, aim at a healthy life.

That is why it’s good to know at least the basic points of Ayurveda philosophy. That is how one can easily join the “doctor’s team” and contribute to his own recovery. On the contrary, if he doesn’t change his lifestyle, he can be temporarily cured but he will suffer diseases again.

According to Ayurveda, everything that exists is created by and follows the General Laws of creation of the Universe. Harmony is one of the main notions of these laws.

The Universe, the nature, the human being exist in a dynamic balance, being the human a micro-projection of the Universe and the Nature. If he doesn’t follow the rules that he was created to follow, if he breaks the total equilibrium, he starts suffering diseases.

There are two basic principles of Ayurveda. The first is Panchamahabuta - the principle of the FIVE ELEMENTS that compose the whole Universe. The other one is the principle of the THREE DOSHAS - energy types in the human body. Doshas are combinations of the Five elements and determine the body type of the person - including physiological and emotional particularities, as well as susceptibility to diseases.

The Five elements and the three Doshas

The Universe and every visible element of the world are composed by the five eternal elements of the creation.

It is visible that the Five elements, as Ayurveda notions, exceed the particular visual phenomena related to the words, e.g. Fire. The Five eternal elements of creation are characteristics, principles.

The Five elements interact in the human body in the form of three Doshas - three energy types. First Dosha is Vata, the second one - Pitta and the third one - Kapha. For every individual their combination is unique.

VATA is the combination between space and air.

It is light and dynamic energy, also cold. It is responsible for the movements. It includes all types of movements - from winking, blood circulation and breathing to moving.in space.

PITTA is fire and water.

It is a passive and warm energy. It is related to the tissue and organ transformations and metabolism in particular.

The proportion of the three energy types is different for every individual and is given by birth as a unique lifelong “code”. Combinations can vary. The rule is that the combination consists of different energy levels being one or two of the energy types predominant to a certain level.

The combination determines the body type of every individual - including skin, eye and hair colour, as well as body processes. That is how the two principles of Ayurveda - of the Five elements and the three Doshas - determine the health condition, diseases and remedies.

Why do we get sick?

As we have already noticed, Harmony and Balance are basic notions in Ayurveda. Every disturbance of the equilibrium leads to a problem.

It is the same with diseases - they appear in case of an imbalance of the proportion of Doshas. The “code” of combination of the three energies, imminent to the individual by birth, means energy, ease, happiness - which means health. In case this code is disturbed, diseases appear.

That might happen mostly as a result of bad habits. The most common ones are unhealthy food, poor nutrition, or both in most of the cases. 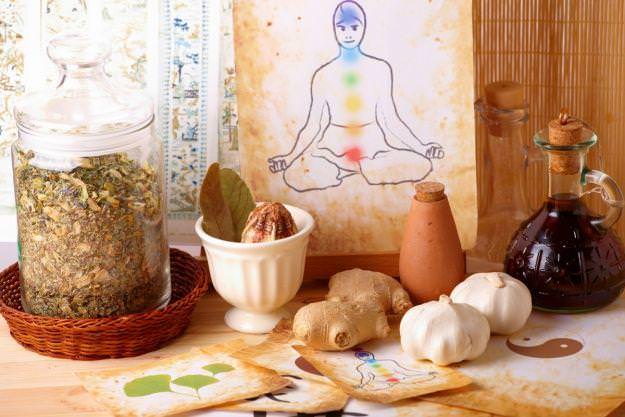 Furthermore, people often don’t respect the activity cycles of their bodies and don’t manage to combine work, relax and physical activity in a good way in their everyday lives. The activities related to the spiritual health are underestimated which leads to physiological problems.

Therefore,  the Ayurveda doctor  prescribes an individual daily timetable and a lifestyle plan for the time after the treatment so that the individual doesn’t get sick again.

That requires a precise Ayurveda diagnosis of the disturbance of the energy balance. It combines several methods.

In ROGI PARIKSHA the doctor examines the appearance of the body, determines its structure, considering its age. An examination through touching and listening follows. After that he asks the patient about the symptoms he detected.

DASAVIDHA PARIKSHA determines structural disturbances and physiological problems, considering the geographic and climate conditions of the place where the patient lives, his job, diet and nutrition habits, everyday details, etc.

Physiological factors allow checking if there are digestion problems, what the physical and psychic resistance are.

ASHTAVIDHA PARIKSHA checks your pulse, the condition of the tongue, eyes and the sight, the level of your voice, touch sensitivity, urine and faeces look.

Based on that, recommendations are given according to the patient’s characteristics – diet, physical activity, etc.

Ayurveda is natural and environmental friendly medicine that works with herbs and natural oils. There is a lot of knowledge in the respect, as well. In old texts are described 50,000 herbs and formulas for different combinations according to the disease, its stage of advancement, the particular characteristics of the patient’s body type.

Some ointments and sachets might use purified metals but they should be strictly dosed in respect of the resting ingredients and their aim is to enhance their action. 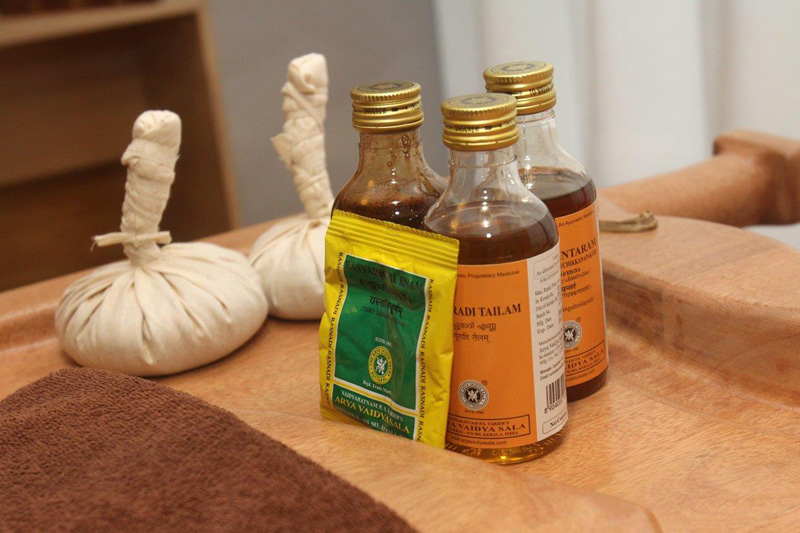 Recipes prescribed by Ayurveda doctor are personal and shouldn’t be used by anyone different from the patient even if other people experience similar symptoms.

That’s because every individual has specific characteristics and the effect of the prescription is only valid for a particular patient in particular condition.

In Ayurveda the toxins accumulated in the body are the main source of imbalances and disturbed organ, system and body functions which lead to diseases.

Poisonous substances are accumulated in the body mostly due to poor nutrition although the contamination of water, soil and air also affect. Therefore, body purification is important in order for it to recover its initial healthy condition.

The most famous methods of Ayurveda therapies are Purvakarma and Panchakarma. They are combined together and the doctor decides what therapies of which method to apply and how to combine and order them.

PURVAKARMA uses two types of therapy: Snehana for oelation of the body and Swedana for perspiration.

Oilation with natural oils can be external – Baya or internal – Abhyanga. Apart from drinking it, internal oleation with herbs oil or Ghee can be made by gargling, putting it into your ears or nose.

Those therapies serve as preparation in order to move the toxins to the periphery of the digestive system so that they can be eliminated.

PANCHAKARMA is an internal purification that forces the poisonous substances out of the body. The method includes five therapy types.

VAMAN provokes healing vomiting which balances Kapha and releases the toxins of the upper part of the body.

VIRECHAN is a laxative procedure that balances the Pitta and takes the toxins out through the digestive system.

BASTI is a healing enema. It aims at balancing the Watha energy and improves the work of the colon.

In NASYA healing oil is put into the nose in order to remove toxins from the head and the surrounding area.

Speaking about Ayurveda treatment, something very important should be pointed out about this ancient science. It is focused mainly on prevention or how to live long-term without diseases and enjoying life. And Ayurvedas not only insist on it but actually achieve it.

Hence, if we are already suffering a disease, we should obviously change something in our lifestyle. And Ayurveda shows us what to change and how to change it.