General principles of eating in Ayurveda. Types of medicinal herbs and foods

For Ayurveda it is difficult to say what is the first, the second or third most important thing. It was born out of a thousand-year experience, summed up by Indian wise men in a orderly concept of the Universe and the place of man in it.

This concept includes interrelated visions of the whole life of a person – the state and development of the physical body, the emotions, the psyche, the spiritual life. The medical side of Ayurveda is entirely related to these views. Each detail matters – without the details the “puzzle” won't be complete.

If, however, a "ranking" is to be made in importance, perhaps you should start from the view on Ayurvedic eating. The body receives energy from the food which helps it live and develop. Incorrect eating, however, can turn food into a source of toxins. And according to Ayurveda, the accumulated toxins in the body are the main reason for diseases.

Therefore, there are special principles of eating in Ayurveda. They are in conformity with a person’s Dosha. Doshas are three types of energies in the body that Ayurveda associates with the five elements of Creation. These elements are water, fire, earth, air and space.

Here they are understood as philosophical categories and go beyond the direct meaning of the words. Fire, for example, expresses the passage of matter from one form to another.

The first Dosha is called Kapha – a combination of water and earth; Pitta is thought as fire and water; Vata represents the air and space. They are in a specific balance in each person their correlation being determined at birth and lasting during the whole life of a person.

In this correlation one or both Doshas can be dominating in a certain level. This correlation determines the Dosha – the individual construction – of each person: from the physiological functions to the spiritual world.

The Dosha should be determined by an Ayurveda doctor because many characteristics must be taken into account correctly – from physiological features such as weight, skin, nails, pulse, etc. to tendencies, sensations, dreams and many others.

Ayurveda eating principles according to the type of Dosha

The optimal Ayurveda eating is determined according to the corresponding Dosha of a person. It must not be confused with vegetarianism even though the rules for the Ayurveda eating are based on vegetarianism. Not all fruits and vegetables which are included among Ayurveda foods are beneficial for all Doshas.

The same thing applies for tastes. Some have a warming effect and others cooling. They need to be present in everyone's food, however, with different Doshas some tastes need to be more prominent and others – in minimum quantities. There are also certain combinations and order of consumption because each food is degraded and absorbed in a different way. Therefore, there are foods that are incompatible. 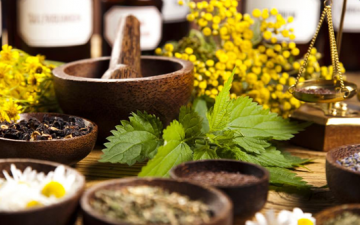 For Ayurvedic practitioners, the combination of foods and tastes can ease a person’s digestion but it could be an obstacle and hinder the complete absorption of food; food remains are stuck in the body and start to and the body is stuck with debris that begins to produce toxins.

Foods and tastes help increase or decrease one of the three energies in the body. The correct Ayurveda eating maintains the balance of the energies. Incorrect eating interrupts the balance and leads to diseases.

Spicy, bitter and tart foods are beneficial to people with Kapha construction and they should limit the sweet foods. Their menu must include legumes and brown rice; soy cheese is also beneficial and as a spice – ginger. From the vegetables they should avoid cucumbers and tomatoes. Meat, wheat, dairy products and white rice are contra-indicated.

For people with Pitta, the menu must consists of cereals as well as legumes and dairy products low on fat and salt. Beneficial are cauliflower, asparagus, sprouts, sunflower. Peppers and sage are to be avoided. Suitable fruits are grapes and apples and as spices: cinnamon, dill and mint.

For people with Vata, the balance is maintained through salty, sour and sweet foods. The menu includes meat (excluding rabbit and beef), wheat, rice, buckwheat and dairy products. Legumes and watermelons are to be avoided.

Ayurveda has many herbs and formulas for their combinations to influence the Doshas, for detoxification and tissue repair. Basically, this ancient medicine has herbs to treat any disease. Wise men and healers have left more than 50 000 recipes in the old texts.

Some of the herbs and their combinations are drunk on an empty stomach, others are taken with the Ayurvedic meals specific to each Dosha, while there are those used for smearing, rubbing, pouring, herbal saunas, etc.

Apart for specific diseases, Ayurveda has healing foods and herbs with a wide range of action that are beneficial to all Doshas. One of them is Amalaki – a type of Indian grapes . It has a lot of vitamin C. It acts anti-inflammatory and thus helps immunity. It has digestive enzymes which favor digestion and it also improves the function of the liver.

Amalaki acts multilaterally also with tastes because it contains all tastes except for salty, the predominant taste being sour. It helps decrease the energy of all three Doshas but is particularly favorable for Pitta.

Haritaki is a type of almond that also acts broadly, balances all three Doshas. In terms of tastes, it combines sweet, tart, sour and bitter. It has anti-inflammatory action and a laxative, cleansing effect. It favors the immunity and the liver and hearth functions.

Bibitaki is a small fruit with a tart taste that is especially for balancing of Kapha. It is beneficial to detoxification, lungs, excretory system, liver and also in diseases of the eyes, ears and throat.

Ayurveda has a formula for the combination between Amalaki, Bibitaki and Haritaki. The result is Trifala with an even more comprehensive effect. Trifala is available in powder, in capsules and in tablets. Usually it is taken evenings after at least two hours after dinner. If it is in powder, the dosage is half a teaspoon per one tumbler. Hot water is poured in and once it has cooled down the solution is drunk up. Tablets and capsules are usually taken two in the evening with warm water.

Just as Dosha has to be determined by an Ayurvedic doctor, also the menu for the Ayurvedic eating has to be created by an expert especially if the person is ill.

In Ayurveda, eating includes also many supplements: herbs, spices, sweeteners, etc., which have to be selected for the specific case. However, there are some common principles in Ayurveda that can be used as basis for a healthy eating according to a person’s Dosha. 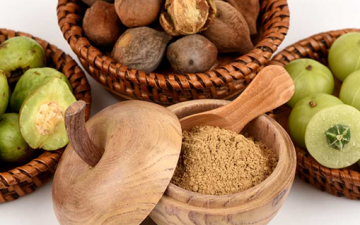 Vata needs warm food rich in proteins and carbohydrates. Grain foods account for 50 percent of the food, legumes – about 20 percent; poultry and fish are also allowed. The vegetables must be cooked while fruit can be eaten raw.

Breakfast must be early and abundant; lunch must be light, for example pastry or soup; dinner must be before 7 p.m. and contain a lot of proteins.

For Pitta, it is recommended to consume cooler foods and avoid sharp tastes. Seasonal fruits and vegetables, juices and regular light fasting are recommended.

Vegetables are highly included in the menu for Pitta – at least 50 percent of the food. Grain foods are at least 25 percent and proteins – about 20%. Meat and animal products must be limited to the highest degree.

Breakfast for Pitta has to be light, the main meal is at lunch. If the body has no health problems, dinner can be at a later hour because the digestive fire is strong.

For people with Kapha the food has to be warm and light, raw foods have to be strongly reduced, the produces used for cooking have to be absolutely fresh. Seasonal fruit is recommended; vegetables represent 35 percent of the food. Grain foods are up to 25% and legumes – 25 percent. The included meats are fish, poultry and buffalo meat.

Breakfast is between 7 a.m. and 9 a.m., lunch is light as breakfast. Dinner may be late, again, it must be light and contain many proteins.

← What are Artha and Moksha in Ayurveda? How to care for your skin according to Ayurveda →