What is the bipolar disorder?

Bipolar affective disorder is a disease caused by disorders of the cerebral functions. It is characterized by the alternation of opposing moods – from strong depression /frustration/ to excessive excitement /mania/ and vice versa.

There are no objective reasons /situations or events/ for these periodical transitions from one polar mood to the other. The intense excitement, which is one side of the disease, can be observed during life problems, while the depressive state may occur in times of well-being. Of course, not every mood swing from excitement to depression and vice versa indicates a bipolar disorder.

Whether the disease exists must be determined by a psychiatrist based on the frequency of the polar swings, sequence and duration of the periods, and a number of characteristics with regard to thinking and behavior that these changes lead to. The condition is equally common in men and women. The condition may be activated due to genetic predisposition, but very often it is unlocked by different life crisis.

The most dangerous thing in depressive periods is that can lead to suicide. Self-esteem is very low in these periods, the patient is blaming himself for things he considers to be failures, as the future seems dark and accompanied by problems and pain, which makes the life meaningless burden.

The patient loses interest for things that he used to enjoy, he becomes sad, passive, experiences difficulties to concentrate, becomes easily tired, and is not able to work optimally, his duties burden him, so he stops taking care of himslef.  The reduced appetite and insomnia are also indicative and these symptoms make the physical condition worse. Thus, these people are excluded from the social life.

The other extreme – the mania – also lead to a number of personal changes of an asocial type. In such a situation, people cannot objectively asses the situations around them. They are joyful, content, but also very irritable at the same time– even to states of anger and strong conflict if any of their desires are not fulfilled.

They are very active, but often overestimating their abilities, they undertake things without thinking and fail, then start something else, easily deceived in business affairs and property cases. Other people – colleagues, friends and acquaintances often associate their conflict nature with bad character and isolate them, so often the patients lose their jobs.

The treatment of the disease with the help of Western medicine is based on pharmacological drugs. Antidepressants are used for the depressive periods, often in combination with sedatives. Manias are treated with timostabilizers and neuroleptics. The patients undergo an educational course to recognize the symptoms of the onset of the disease periods so they can have a reaction plan. 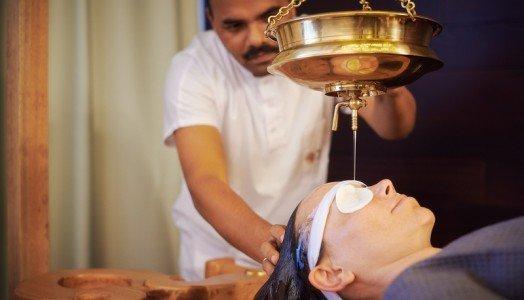 Bipolar disorder according to Ayurveda

For Ayurveda, all processes in the body are managed by three Doshas – the vital energies, each of which is responsible for certain functions. Bipolar disorder is a mental disease, and Ayurveda associates it mainly with the aggavated and imbalanced Vata Dosha – the energy that controls the brain and the nervous system.

Excessive Vata causes instability of the mind, as well as excitement and addiction, which reduces self-control. The connection with the physical body weakens, so the harmony between the spiritual and physical world gets disturbed. The intense care and commitment to one’s thoughts leads to dissipation of the vital energy, replacing reality with a fictional world in which the patient believes, so he start experiencing worry, fears, sudden mood swings. Vata aggravates due to various external influences – loud music, media, increased libido, stimulants, drugs, and so on.

Doshas, however, are interconnected –changes in one causes disturbance in the other two. Thus, in the basis of the bipolar disorder may be Pitta dosha to a large extent, which is related to quick temper, arrogance and aggressiveness. When Pitta dosha is aggravated, one is distrustful, does not accept the opinions of others, blames others for his own problems, he is suspicious and sees enemies everywhere.

Disturbances of the third type – due to Kapha dosha, are accompanied by intense sleepiness, often during the day, apathy and lethargy. People lose their desires, motivation, as the mind can not think abstractly and see the world as it is, so he becomes passive and dependent on the care of others.

Treatment of bipolar disorder with the help of Ayurveda

Ayurvedic treatment of bipolar disorder is focused on strengthening the overall physical and mental health. This happens when the Doshas restore their balance and the optimal functions and processes in the body are not disturbed.

The treatment includes daily regime and dietary regime, herbal remedies, natural oils and pouring, massages, spiritual practices and yogic methods – meditation, breathing practices, and mantra singing, and so on. The Ayurvedic treatment is complex, complicated and, at the same time, strictly individual according to the specific imbalances in the general health condition of the patient. Therefore, this treatment can not be fully explained because it does not apply in the same way to everyone.

However, some basic principles may be mentioned, for example, the need to restore the clarity and pureness of the mind above all. In order to do so, one must follow a diet that includes clean and beneficial foods, which makes sure that will not cause imbalances in one of the energies, because one food may be useful for one Dosha, but contraindicated to other. Fruits help to harmonize the mind, as it becomes sharper with the help of cereals, and ghee butter nourishes the nerve tissue, etc.

To soothe and nourish the mind, people undergo certain procedures, for example, pouring of the head with oils, which, however, is not performed for Kapha. But if it must be done, the mustard oil is the best oil to treat Kapha with. The heavy oils used for soothing and improvment of the sleep for Vata include sesame oil, and the coconut oil is used for Pitta balance.

The sandalwood essential oil also has a soothing effect. Very often herbs are used to strengthen the nerves – brahmi for Pitta dosha, ashwagandha for Vata dosha. To cleanse the energy channels and improved perceptions Ayurveda recommends incense, mint, and so on. Warm oil is smeared on the forehead for improvement of the perceptions, and to increase the mental abilities – the upper part of the head. To soothe the subconscious mind – the base of the neck should be smeared.

To treat Vata imbalances causing mental diseases, Ayurveda applies enemas with calming oils, for example, sesame oil that nourishes the mind, as well as harikati and aswagandha.  Thinking become clearer with the help of camphor and cedar, while jasmine cleanses the emotions, and gardenia purifies the heart.

A number of home plants such as basil help not only to cleanse the air, but also the mental state.