AyurvedaSofia / Blog / Ayurvedic foods – herbs and spices in the diet

Ayurvedic foods – herbs and spices in the diet

The use of various spices in food opens to a person a whole world of tastes and smells, which in the ancient science of longevity and a healthy lifestyle Ayurveda acquire special significance.

Herbs and spicesnot only make dishes tastier, but have many useful properties and something very important – they can affect the balance of doshas. By adding spices to food, you can increase its usefulness and alsoimprove both your physical and emotional health.

Ayurveda foods – herbs and spices in the diet, improve digestion and add energy and strength.

What herbs and spices can we consume according to Ayurveda?

Treatment with plants and herbs is an ancient traditionnot only in medicine in the East, but also in the West. The healing power of plants, their properties to give strength, eliminate diseases and improve mood are also used in Ayurvedic practices.

There is a large group of plants that have entered our daily lives as spices and serve to improve the taste and aroma of food. In addition, in addition to this purpose, spices can also be drugs. 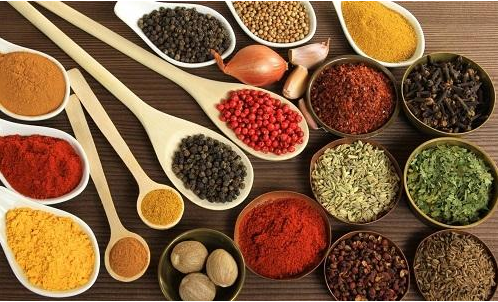 In Ayurvedic medicine, the theory of six tastes is accepted. They are: sweet, salty, sour, bitter, astringent and spicy. According to her, the more aromas a plant has, the wider its healing properties.

The following tastes are most suitable for the different doshas: for Vata these are sweet, sour, salty; for Pitta – sweet, fuel and astringent; for Coffee –  spicy, bitter and astringent.

Properly calculated proportions of spices and herbs in the daily menu not only emphasize the taste palette of dishes, but also help toprotect the body from a number of diseases and the balance of subtle energies, which allows you to achieve the desired balance of vital forces of doshas .

How do the different spices work, what do they help and how to combine them?

Coriander is an amazing herb that has been well known to ancient civilizations in vast areas from the Mediterranean basin to India and China.

The spice was actively cultivated and used for culinary and medicinal purposes by the ancient Greeks, Egyptians and Romans. The medicinal and culinary characteristics of coriander are based on essential oils, which are abundant in the seeds and leaves of the plant. 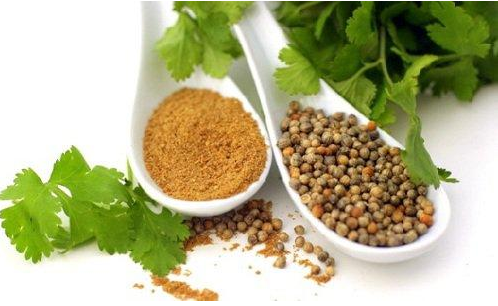 Coriander is often used in Indian and Mexican cuisine. The spice can be used in fresh dishes or in the form of seeds and dried powder.

Use coriander seeds in combination with other spices to add a spicy taste and aroma to vegetable and meat dishes. With fresh coriander leaves can be sprinkled with side dishes, beans, stewed vegetables, lentils and rice dishes.

Ginger is one of the most sought after spices, actively used in Ayurvedic practices. Ginger root is eaten raw or dried. Fresh raw porridge has an active effect on the digestive system, increases the secretion of gastric juice and activates the intestines. 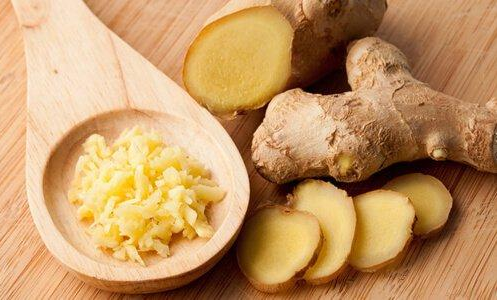 Ginger root can have a direct effect on the balance of human vitality. To maintain or absorb vital energy it is best to use concentrated dried ginger,  fresh porridge is preferred to restore Vata. For people like Pita, ginger in large quantities is contraindicated. They can use it to detoxify and cleanse body fluids of toxins.

To combat migraines and pain as a result of the development of frontal sinusitis, use a paste prepared from half a teaspoon of powder and warm boiled water.

Fresh warm paste is applied on the forehead and held until a pronounced warming effect. Drinking ginger tea with a few grams of castor oil at bedtime can help relieve inflammation and relieve pain in rheumatoid arthritis.

Ginger decoction is an indispensable tool for accelerating tissue regeneration, removing toxins and toxins from body fluids. Eating marinated or fresh ginger roots before breakfast restores masculine strength and potency, for women from Kafa this recipe helps in the treatment of infertility.

Contraindications to the use of ginger can be noted ulcers of the stomach and duodenum, chronic internal inflammatory processes, individual intolerance to the active elements of the root.

Translated "Rosemary" means "sea dew".In many sources this plant is referred to as a miracle herb that can cure many diseases. 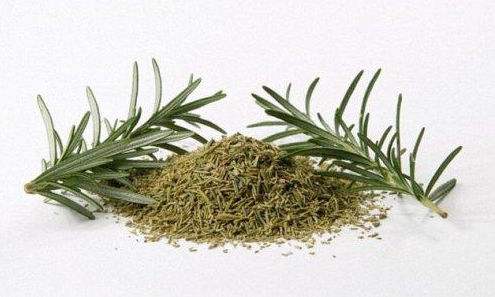 In Ayurveda, rosemary essential oil is used to:

This plant also helps to get rid of flatulence.  Adding rosemary essential oil to water while taking a bath can help relieve chills and rheumatism. It can also be used as a gargle for sore throats.

Rosemary oil has an antibacterial effect and helps you heal colds faster. Studies show that people who regularly consume rosemary are less likely to suffer from cataracts, fractures, heart disease and Alzheimer's disease.

Rosemary is useful for stress, nervous exhaustion, depression, fatigue and anxiety. Taking a bath with the addition of this herbal oil helps to relax, relieves physical fatigue, strengthens and improves mood.

Rosemary can be used as a spice. It perfectly complements side dishes, cold drinks, soups, marinades and meat dishes. This herb can be consumed both fresh and dried.

This amazing plant  is widely used in religious rituals, in cooking, in medicine and cosmetics. In India, turmeric is believed to possess the energy of the Divine Mother, protect against evil spirits and attract wealth, success and health. From India, this ancient plant spread throughout Asia and then to Europe. 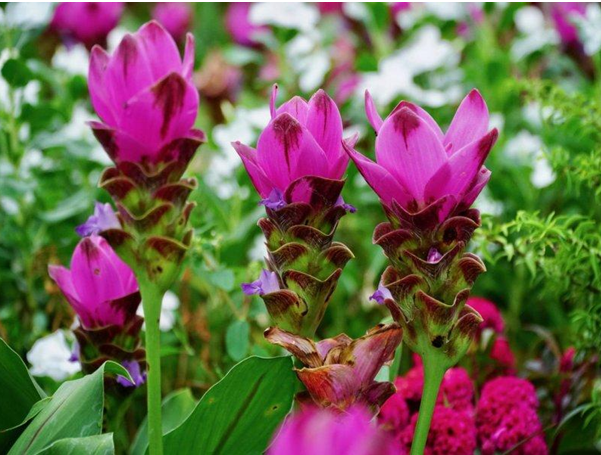 Turmeric has long been widely used in Ayurveda.It is an excellent natural antibiotic that both improves digestion and helps to normalize the intestinal microflora.

Thanks to this, turmeric serves as a good antibacterial agent for exhausted and chronically ill patients. It regulates metabolism and promotes the absorption of proteins. Enhances reproductive function. Has a therapeutic effect in:

Turmeric is effective in cleansing the chakras and channels of the subtle body.

Many experts consider garlic to be one of the most ancient medicinal plants on Earth. Garlic bulbs harvested during their full maturity are used for medicinal purposes. Over the centuries, garlic has been considered a miracle cure for especially dangerous infections: 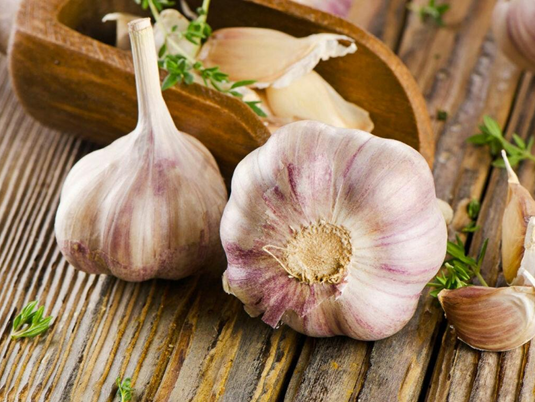 Garlic has strong anti-aging properties. It is a powerful detoxifier that is effective in chronic and recurrent fevers. Cleanses the blood and lymph of toxins. It is effective against viruses and bacteria of the respiratory system and gastrointestinal tract. Garlic increases sperm count and is considered an aphrodisiac.

According to its Ayurvedic properties, the taste of garlic is spicy, bitter, astringent, sweet, salty. It has therapeutic effect in colds, flu, infections, asthma, bronchitis, parasites, atherosclerosis, weak immunity.

It is widely used in cooking both fresh and cooked it is suitable for salads and hundreds of dishes from many national cuisines.

For several centuries, cinnamon has been one of the most popular spices on all continents. This spice is made from the dried inner bark of a tree that grows in India, Sri Lanka and some other countries in Central and Southeast Asia. 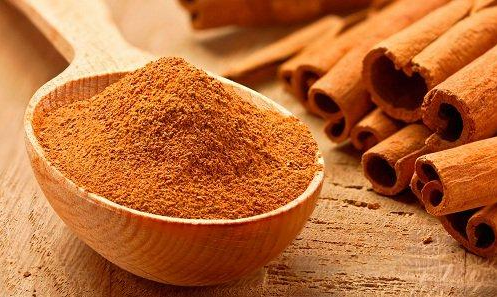 Due to its unique healing and taste properties cinnamon is highly valued in Asian traditional medicine and cooking, as well as in European and American cultures. The spice is added to simple dishes such as rice and lentil porridge, to fish and cheese, as well as to pastries and cakes.

According to the teachings of Ayurveda, cinnamon combines three flavors: sweet, bitter and spicy. It is an effective tonic that can activate the body, revitalize the mind and support the immune system.

For those suffering from chronic fatigue, cinnamon is a miracle cure. When used regularly, this spice will relieve bad mood, apathy and at the same time have a relaxing effect. Cinnamon preparations help with cough, treatment of infectious diseases, colds and inflammatory processes in the throat.

In Asia and Europe, this spice is known as an aphrodisiac. Its antibacterial, antiviral and antifungal properties make it an excellent medicine for the prevention and treatment of a wide range of infections. Black tea with cinnamon or herbal tea is extremely useful in the treatment of erectile dysfunction.

The taste of cinnamon is highly valued by almost all national cuisines in the world. The spice combines sweetness and a characteristic spicy aroma, which gives the sweet dishes a unique taste. Cinnamon is generously added to many desserts, including:

In the Middle East, cinnamon is added to spicy meats, rose water and green or black tea. In Indian cuisine it is used for rice dishes and for stewed vegetables. Cinnamon is delicious with sweet potatoes and in desserts with dates and almonds.

Clove is called the Celestial Flower of the East. This spice is obtained from the dried closed flower buds of the evergreen myrtle tree. The aromatic plant is especially revered in ancient Ayurvedic practices. 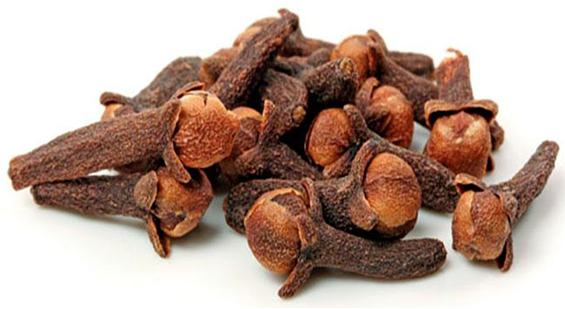 According to the Vedas, cloves have an active effect on the three doshas: it lowers Kapha, Vata, and at the same time increases Pita and stimulates the work of Agni  (the fire of digestion). Reducing Kafa dosha allows for the treatment of colds, and Vata dosha – acute intestinal pain, hiccups, gas problems.

Cloves have an expectorant and powerful analgesic effect. In traditional Ayurvedic medical practice, cloves are used to treat respiratory ailments, including laryngitis, sore throats, asthma and severe coughs. The spice is recognized as a powerful aphrodisiac. Regular consumption of a small amount of oil of this plant gradually balances Pita dosha, frees the body from the feeling of lethargy and improves the functioning of the digestive system.

To achieve an anti-inflammatory effect, add a few drops of essential oil in warm boiled water to rinse your mouth. It relieves toothache and refreshes the breath.

Nutmeg is one of the most ancient and sought after spices, actively used in traditional medical practices in the countries of Central and Southeast Asia. Raw, dried or ground into a powder, these nuts are widely used in Ayurvedic practices as one of the main spices. Nutmeg increases Pita, soothes Kapha and balances Vata. 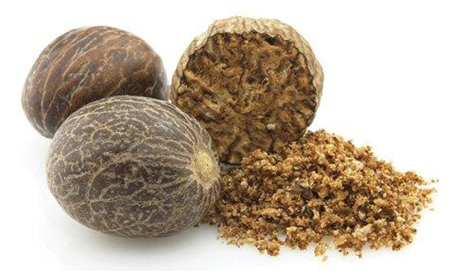 Regular intake of nutmeg oils can help deal with indigestion as well as intestinal congestion. Nutmeg is an excellent ally in the fight against nausea and flatulence.

In small amounts, the essential oil helps improve brain function, memory and concentration. Adding a few drops of oil to bathing water helps to relieve stress, fatigue, stimulates brain function and has a beneficial effect on sensory nerves. For insomnia, add a pinch of ground nutmeg in warm milk and take this drink before bed.

Nutmeg is an essential part of many dishes in traditional Indian cuisine. Most often added to:

Nutmeg is contraindicated for pregnant and lactating womenbecause of the high pie. The use of nutmeg is not recommended for people suffering from diseases of the pancreas.