Glaucoma in the concept of Ayurveda

Glaucoma is a treacherous disease that can lead to blindness. It develops gradually, for years without obvious symptoms, until it enters an advanced stage.

As the disease progresses, the following symptoms may occur:

The disease usually affects both eyes but does not progress equally intensive, as the occurrence of problems in one eye is compensated by the other. Thus, the glaucoma patients do not realize that damage has begun and, until the final stage, patients realize with surprise that they have this disease and lose their vision.

The cause of glaucoma is an increase in the intraocular pressure due to accumulation and rettention of aqueous fluid. That is why Ayurveda associates it with imbalanced Kapha – the Dosha, which is responsible for the control of fluids in the body. The increased pressure in the eye exposes the optic nerve to excessive compression, resulting in the atrophy.

The fluid that forms the ocular pressure flows through the trabecular meshwork into the front eye chamber under the angle between the iris and the cornea. The pressure starts to increase either if there is a overproduction of fluid or if the "drainage system" is blocked and does not function properly. Thus, the fluid does not drain normally, but it accumulates, increasing the pressure.

Yes, Ayurveda has a variety of herbal based remedies, as well as therapies that with their overall effect, not only reduce the eye pressure, but also restore the normal eye functions. Thus, in addition to avoiding blindness in the final phase of glaucoma, various eye problems are removed.

However, the eyes are a very delicate and sensitive area that can easily be damaged. Therefore, measures should be taken to ensure that the healing remedies are prescribed by a Ayurveda doctor and applied exactly as prescribed, and the healing procedures and therapies for head and eyes have to be performed only by a licensed Ayrveda specialist. 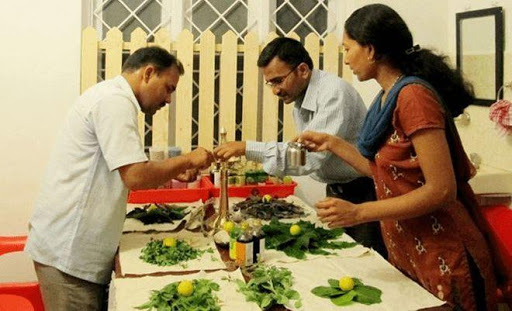 Answering positively to the question “Can Ayurveda heal glaucoma”? we should also mention the special place of nutrition. According to Ayurveda, food is a medicine – it is an individual accent in the treatment of any disease in order the Doshas to be balanced, it is also a propxylaxis against diseases, it contributes to the cleansing of toxins.

The diet is strictly individual for each patient with glaucoma, and it should be prescribed by expert Ayurveda specialist according to the potential other diseases found. Thus, the general condition of the patient will require balancing not only of Kapha, but also the regulation of the other two Doshas – Pitta and Vata. In general, however, Kapha should be restored in its unique balance, and Ayurveda recommends certain foods, way of eating and time of their consumption to do so.

First of all, food that helps to balance Kapha should be cooked with little amount of water, it has to be dry, light and consumed warm and with more spices. Moreover, it should not be greasy, as the recommended flavors are spicy, astringent, as well as bitter. Sweet, sour and salty are contraindicated because they increase Kapha.

The spicy foods activate the digestion and warm the body, while the bitter and astringent foods help to reduce the appetite of Kapha. Thus, on the one hand, excessive food intake is limited, and the consumed food is degraded and absorbed fully, as it does not form toxins that can block various conductive channels. In addition, a number of spicy or warm foods causing tears, in addition to warming Kapha, help to eliminate the excessive mucus.

The beneficial foods include corn, rye, barley, buckwheat, millet and the foods that should be avoided are rice, wheat, oats, soy and beans. Red meat and seafood should be excluded from the menu, as chicken white meat, turkey and fish are allowed in moderate quantities. The recommended vegetables include radishes, cabbage, eggplants, turnips, red beets, pepper, spinach, carrots, peas, garlic, onion and asparagus. Foods that are not recommended include potatoes, tomatoes, cucumbers, zucchini, okra and olives.

The fruits that are useful for Kapha balance are mainly the astringent ones – pears, apples, peaches, apricots, mango, lemon, blueberries and dried fruits. Juicy fruits, however, are not recommended – watermelons, melons, pineapples, oranges, avocado, grapes, kiwi and figs.

As mentioned, Ayurveda has different healing methods that applies to glaucoma, and at the same time, they contribute to the improvement of the overall functions of the eye.  There are, for example, eye drops that cleanse the tear channels to remove the retention and mucus, they are efficient against infections, improve blood supply, and have a number of other effects. There are also potions that are used to cleanse the eyes, and also other natural  medicines that are taken internally.

Amla juice, for example, has an extremely powerful antioxidant and antibacterial effect, it helps to neutralize free radicals, improves the condition of the retinal cells, stimulates capillaries, as it is used for eye problems, including for glaucoma. The juice should be consumed with honey for better effect /honey is the only sweet food allowed for Kapha/.

To reduce pressure in the eyes and to reduce the intraocular pressure, it is good to make a lavage with triphala potion, which consists of three fruits – amla, babaitaki and haritaki. Part of the overall effect of ingredients is complete relaxation of the vegetative nervous system, detoxification, nourishment and recovery of the tissues. In addition, the herbal complex serves to eliminate the eye irritation, conjunctivitis, corneal dystrophy, age changes and loss of vision.

Unless otherwise prescribed by the physician, a spoonful of triphala can be boiled for two minutes and put into a glass of water, and the potion should be strained through a gauze – two or three layers, so it will not contain particles. The cooled potion should be left for the night and in the morning it should be used to wash the eyes with. Use it for a month at least once per day.

In the earlier stages of glaucoma, prepare a mixture of 5 parts of bergavia, 3 parts jatamansi and shankapushpi. For the potion, boil one spoon of the mixture in a glass of water and consume twice a day.

Of the many therapies and procedures we can mention Netra Tarpana – placement of ghee around the eyes in a special wells made of dough. It help to strengthen the optic nerve, elimination of the pain, relax, as except for glaucoma, it is used also for conjunctivitis, cataract, and so on. Another therapy is Kashayam Dhara, in which the forehead, as well as certain parts of the head and face are rhythmically poured with cool herbal potion, and it has a powerful healing effect on the eyes.

A very essential part of the Ayurvedic treatment is the cleansing of toxins. Food, herbs and spices are very important in this process, but there are also special Panchakarma procedures that powerfully cleanse the organism. The method combines five therapies.

Some of them have balancing effect on the three Doshas, but there are also specific therapies focused on the removal of accumulated Kapha toxins, reducing the mucus and soothing Kapha. Such a procedure is, for example, Pratimarsa Nasyam – pouring of healing oils in the nostrils, as the goal is to release Kapha toxins through nasal secretion. In addition to contributing to detoxification, it nourishes the brain cells; applies both to eye diseases and to problems with the sense of smell, taste, ears, voice and many others. Depending on the condition of the patient, the procedures may last for a month.

Another suitable Panchakarma therapy is the herbal–induced healing vomiting. The effect is cleansing from the toxins, formed because of the Kapha imbalance, elimination of mucus and soothing Kapha. Depending on the medical results of the patient and his general condition, the Ayurveda psecialst can prescribe also a cleansing edema with butter and herbal potion.

Apart from the diet and the specific therapy prescribed, Ayurveda also has general recommendations that can be applied in the treatment of glaucoma. It is important for the patient to figure out what has made him susceptible to the disease and to take measures. Thus, for example, if he is a smoker, he must quit cigarettes or at least ot reduce them, because poisioning with nicotine increases the risk of glaucoma and its exacerbation, especially in smokers, as in non-smokers the risk of glaucoma is lower.

If the patient suffers from high blood pressure, he has to take measures to lower it. The same applies to high cholesterol, diabetes, triglycerides in the blood. Intensive physical overload requiring pushing should be avoided, such as lifting weights. Other exercises are also not recommended, for example, head stand.

If there are Kapha imbalances, it is contraindicated to sleep during the day, especially after eating. It is best to have a walk after lunch and after dinner in order to activate the metabolism and avoid stagnation, which is a traditional problem for Kapha. If you are doing an afternoon break, it is good to be in a sitting position rather than lying position. Night sleep should be on a higher pillow so the head can be slightly raised.
In addition to the physical causes, both emotional and mental blockages play a role in glaucoma. According to Ayurveda, glaucoma mostly affects people experiencing emotional stress and difficulties accepting what is happening around them, especially with regard to past memories. This has caused mistrust and restraint in them, as well as suppression of feelings. This in turn leads to constant tension, and each person has a personal threshold, which once passed, results in physical ailments.

In order to get rid of the unpleasant tension related to feelings and thoughts, one must free himself from the past if it is a burden for him, so he can be more responsible and tolerant to others with all their flaws, and to be more trustful and maintain relationships based on peace and trust, as the concept of Ayurveda states.