AyurvedaSofia / Blog / Does Ayurveda help in Down syndrome?

Does Ayurveda help in Down syndrome?

Down syndrome and concepts of Ayurveda

The disease formulated in Western medicine as Down syndrome is classified by Ayurveda to the branch of Adhyatmika diseases. These diseases have symptoms caused by a spiritual cause coming from a past life.

In Ayurveda, the disturbances in Adhmyatika are known to affect the intellect and the distinctive abilities /Buddhi/, the ability to learn and the life purpose, in particular the will power and determination /Dhriti/ and the memory – Smruti. The diseases of Adhyatmika include include congenital and genetic disturbances. The term Anuvamshika Roga defines genetic disorders.

Thus, according to Ayurveda, Down Syndroma is a disease of Karma – a result of actions performed in past life by the immortal Soul /Atma/, when the soul in another mortal body.  The law on cause and consequences applies here. Everything is a consequence of causes from the past and it itself is the cause of consequences in the future.

Actions are all we do, including mentally, as well as inaction. The soul acts with the help of the mortal body, using the brain, heart, senses, etc. Thus, the soul analyzes the situations, makes decisions and implements the relevant actions. After leaving the body, the body dies but the soul acquires something else. It is the transformation of the Soul on the way to Moksha – the complete spiritual freedom of the Self from the material, and the emoitons and thoughts related to it, and transition to the higher forms of consciousness. When one achieves Moksha, the reincarnation of the freed soul, stops.

On the way of its evolution to Moksha, Atma has limited knowledge, self-control and power. The soul is free to act, but depends on the results obtained.

The actions /Karma/ can be Good, Bad and Mixed. Good, for example, is an action aimed at the well-being of others, as well as self-esteem if it serves for enhancement of the potential of the man for the implementation of good deeds. Bad actions are those that are selfish and aimed at harming others.

Usually the actions are mixed and the Soul experiences both sadness and joy in the body. For every action, good or bad, Atma gets positive or negative credit. Next reincarnation depends on the balance and the existence of the new body is predeterminated by it, and it has predestined duties and redemptions. This is defined as "spiral of destiny".

In that case, can Ayurveda help in Down syndrome, since it is a disease of destiny? Yes – there are ayurvedic medicines that can help the patient suffering from the syndrome of Down for improvement of the memory, cognitive activity, hearing, vision, physical abilities, muscle tone and coordination, relieving various functional defects, improvement of the quality of life and social realization in general.  The qualified Ayurveda specialists apply also a number of yogic techniques – asanas and exercises, as children use their own natural curiosity and things happen as a game. 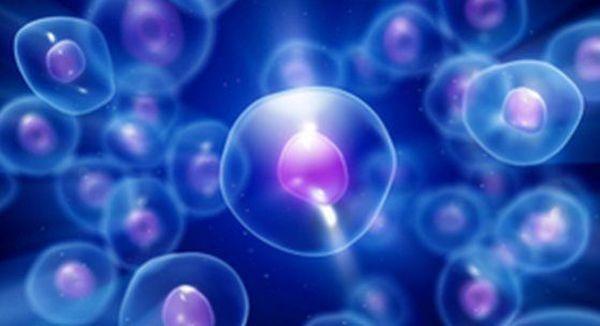 Physiological aspect of Down syndrome

At the physiological level, Down syndrome is a genetic disease.  It is characterized by a third, extra copy of the 21st cell chromosome, which is why the disease is also called trisomy 21. In the normal case, the chromosomal number in cells is of equal number of chromosomes in pairs – from the father and from the mother.

However, if upon the cellular division, the chromosome 21 is not homogeneously divided, a reproductive cell appears with the third copy and thus the cell has 24 pairs instead of 23. This may be an egg, it may be a sperm. The occurrence of the anomaly is random and parents are usually healthy genetically.

Upon the merge of normal cell and a cell with three copies of chromosome 21, the child is "set" with 47 cellular chromosomes instead of 46. The practice has found a strong dependence of the onset of the disease on the mother’s age.

The risk increases if the father is also older. With regard to frequency, the disease affects almost equally both women and men.  Affected men are usually sterile, while in women with Down syndrome miscarriage is common – spontaneous abortion, the risk of having a child with trisomy 21, is 50 percent. 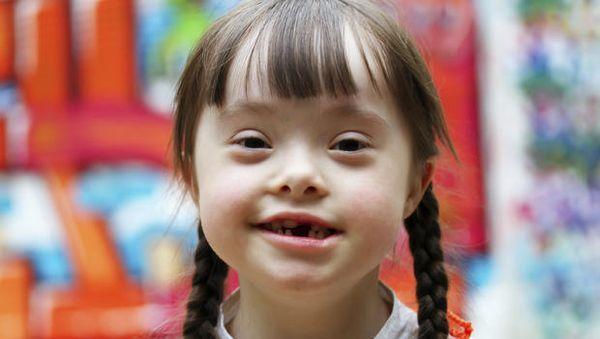 Symptoms of Down syndrome and consequences

Down syndrome has characteristic and clearly recognizable symptoms. The most obvious one is the appearance of the face – flat and with broad forehead, and a nose flatter than the usual. The eyes have an almond shape and slightly curved upward like of the Asians, so the disease is also called „mongolism”.

The mouth is small and the tongue shows because of the relatively weak facial muscles. There are specifics also in teeth – they are small and their arrangement is unusual. The ears are also small with their upper parts slightly bent forward. The neck is short, the head is small, and the arms are wide and short.

The disease includes congenital anomalies in various systems of the organism – the cardiovascular, visual, hearing, gastrointestinal, glandular, especially the thyroid. Breathing problems may occur due to the weak and loose musculature. In fact, the musculature of the entire body is loose, and this may cause motor problems – rolling, walking, sitting and getting up. The low tone of the muscles and mouth may disturb the speech development and nutritional skills. Orthopedic problems are common, as well as the cardiovascular, very often requiring surgery.

In general, slow development and lower intellectual levels can be observed, because the disturbances may affect the functions and the structures of sensory organs and the brain. A common problem experienced by the patients is the loss of memory at a later stage in life. In about 5 to 10 percent of the cases may epilepsy may occur.

How Ayurveda helps in Down syndrome

As mentioned, Ayurveda has numerous medicines and methods for improvement of the condition of patients with Down syndrome:

But when we respond affirmatively to the question Does Ayurveda help in Down syndrome, we have to mention specific medications and methods.

Panchagavya ghrita is a tonic for the brain, it boosts its activity and development. It is successfully applied in schizophrenia, epilepsy, anxiety and other nervous and mental diseases, because it relaxes the brain cells and nervous system in general, and stimulates the muscles.

Moreover, the recipe ingredients are useful for cleansing and recovery of the liver, and are therefore used in the treatment of diseases such as jaundice. The recipe includes antitoxic and nutritional compounds of boiled herbal extracts with melted butter, processed in a special way.

Manasamitra vati contains 73 ingredients and also has a very wide impact, balancing all three doshas – Vata, Pitta and Kapha, so it is useful for a number of diseases. It has beneficial effect on the nervous system in Down syndrome. The product is effective for enhancement of intelligence, it is traditionally used in the treatment of various conditions – depressions, psychosis, mania, seizures, epilepsy, schizophrenia, insomnia, panic attacks, and so on. It improves the speech development because of its action on the nerves and muscles.

Medicinal herbal remedies such as guggul, amalaki, haritaki, draksha and others, improve coordination and muscle tone. Massages with healing oils are also very useful, for example, the whole body massage with medicinal oils such as the Mahanarayan oil that is based on sesame oil and more than 50 medicinal herbs – shatavari, gokshura, aswagandha, and so on.

Brahmi, shankhpushpi, gotu kola and other products are used for improvement of cognitive activity and memory. There are also special medicinal herbal remedies that improve the immunity and reduce the susceptibility to infections – tulsi /sacred basil/, shatavari, aswagandha, and so on. There are also some medicines that help to reduce the effect caused by cardiac defects, hearing and visual problems, and many others. 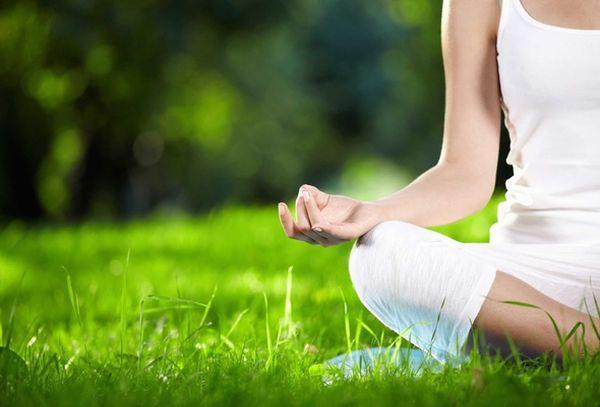 Spirituality as a protection against karmic diseases

As it was mentioned, the karmic diseases, which include also the Down syndrome, result of a spiritual cause coming from a past life, due to bad actions, faults of the Soul while it was in a previous body. According to Ayurveda people, karma will find the person just like the "calf will always find his mother in the pasture with hundreds of cows".

Therefore one has to be ready and willing to act wisely. If there is no such desire, and if he does bad things, then the Cosmic law of justice will make him pick the bitter fruits later. The topic is reviewed in the “Book of immortals”, a particularly popular ayurvedic treatise from antiquity. It says that the onset of the illness, respectively the suffering and failure, is not sudden, they choose to whom to go, because people attract them with their actions and thoughts.

Therefore, having a free will and own path – past, present, future, one has to protect himself, fulfilling his duty of self-improvement, to be devoted to his family, friends, country and to all mankind.

And in Sushruta Samhita – one of the oldest ayurvedic texts, it is said that illnesses caused by past actions can be healed with redemption. According to Ayurveda, in order to protect ourselves from karmic diseases in future lives, we have to get rid of material consciousness, of the attachment to transient, insignificant things of the material world, the excessive tension, irregular and improper feeding, bad society, suppression of emotions and impulses.

People must be devoted to the spiritual, not to become addicted to the pleasures of the flesh, they should be generous, humble, able to give forgiveness and make a repentance, able to see the spiritual essence of all living beings. Then they will be released from all the suffering.

← Can Ayurveda treat glaucoma? Treatment of weak immunity in children →