When does the white discharge indicate a disease?

White discharge is a natural purification and healing process in the female body.

Through the discharge bacteria, a certain acidity, dead cells from the vaginal walls. This helps to maintain the normal vaginal environment.So, if it proceeds normally, the white discharge is not a disease of the sexual system, as a lot of women are worried groundlessly. There are however a number of diseases, which cause changes in the discharge and create intensediscomfort.

The occurred anomalies, as well as the peculiarities of the discharge themselves like smell, colour, thickness, are specific for every woman according to the specific body. Still, the changes in the white discharge and the accompanying symptoms may indicate an ongoing condition or disease. If the discharge becomes brownish,accompanied by pelvic pain, most probably the problem is related to thefrequency of the monthlycycle, but it may also indicate cancer – of the uterine mucosa or a cervical cancer.

Very common are the sexually-transmitted bacterial infections. Such one, for example, is gonorrhea. With it, the white discharge becomes darker, it may also geta yellowish tint, may be accompanied by urine incontinence, and between the menstruation cycles, there might be vaginal bleeding.

Another type of sexually-transmitted disease leading to changes in the white discharge is the trichomoniasis, caused by a single-cell micro-organism. With it the discharge becomes foamy; it can be yellow or greenish; urination is accompanied by pain and burning sensation. 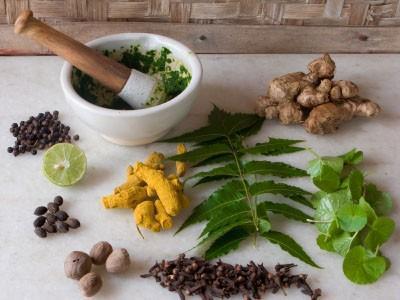 Also, harmful are the frequent abortions, the nervous tension and the grief, traumas, emaciationdue to diseases, day sleep and sedentary life, poor hygiene and others. This creates an imbalance in the energies /Doshas/, which are responsible for the functioning of the different organs in the body.

When the deviations in the energy flow are related to Vata, the discharge becomes dry, pink, foamy, painful and its amount increases. If the imbalance is in Pitta, the discharge has yellow and blue nuances; there isburning sensation, the skin becomes red. If the reason is imbalancedKapha, the discharge is mucous and pale. As Ayurvedarestores the energy balance and the overall health, the treatment steps are complex:

Eggs, meat, fish, fats and fried food should be excluded from the diet. It is necessary to have lots of fruits, vegetables, and fiber-rich food. It is healthy to have yogurt in the morning; also, one can have a banana in the morning andduring the day. In addition,the fluid intake should be increased.Together with the water, soups are recommendable, as well as fresh juices, for example, cranberry juice.

There are a number of Ayurvedic remedies with versatile activity, which are used in white-discharge disorders as well.Among them, for example, is Lodhra, which has antiseptic and astringent properties, absorbing the unnecessary liquids and others. Neem with antiviral, antibacterial and antiseptic effect is also used.

Mango can be usedto prepare a paste fromits flesh which is applied on the vagina.Fenugreek can be used as well to boil 2-3 spoons of its seeds in a litre of water, after which, it is left simmering atlow temperature for about half an hour. After filtering, it is usedto have a warm douche. Also, black thistle is used, liquorice and many others.