AyurvedaSofia / Blog / Can we heal diabetes with the help of Ayurveda?

Can we heal diabetes with the help of Ayurveda?

Diabetes is often referred to as a „silent killer”, because it comes unexpectedly, slowly and without initial symptoms. Sometimes it may take years for a person to decide to do a medical check-up and find out that he/she is already diabetic.

Diabetes is a disease in which sugar is not metabolized properly by the organism. There are two main types of diabetes – type 1 and type 2.

This question intrigues all diabetic patients or people who have symptoms of diabetes, and the answer is that Ayurveda can offer an adequate and effective treatment of diabetes.

The disease, which is nowadays the fourth cause for death in developed countries, as well as one of the causes for coronary disease and heart attack, was known to Indian doctors and it was described in details in the Ayurvedic more than 3000 years ago.

In Indian holistic medicine, diabetes is known as Madhumeha, which in Sanskrit means „copper urine”. The ancient writings describe the causes and symptoms of the disease, as well as the treatments.

Ayurvedic practitioners treat diabetes with a multifaceted approach, which includes a dietary regimen and a change in the eating habits, therapies such as Panchakarma and shirodhara for system cleansing, herbal remedies, yoga, breathing exercises and meditation.

Ayurveda recognizes the multifactor nature of diabetes by referring to genetic markers, the constitution and existing imbalances according to the type of Dosha of the diabetic patients.

Treatment of the disease is difficult, it requires persistence and a lot of patience, but the end results achieved with holistic ayurvedic methods of treatment show very good results.

Principles of treatment of diabetic patients that are applied by Ayurveda

The treatment applied by the Indian holistic medicine aims not only to balance blood sugar levels, but also to rejuvenate the body and promote a positive change in the patient’s life. Ayurvedic herbal medicines and therapies are focused on the main cause of the disease, as they aim to strengthen the immune system and improve digestion, and help the patient to have a healthy lifestyle.

The healing herbal remedies and the recommended therapies for treatment of diabetes rejuvenate the cells of the organism, allowing them to re-produce insulin properly.

The treatments applied by the Ayurveda physicians are not only very effective, but in type 2 diabetes, especially if found at an early stage, the processes are completely reversible.

Types of diabetes according to Ayurveda

In Ayurvedic Indian medicine, any disease in the human body arises as a result of disturbance in the balance of the three Doshas – Kapha, Pitta and Vata, so the focus is on specifying the disturbed dosha and on its subsequent balancing.

Diabetes of the Kapha type

This type of diabetes occurs due to the disturbed energy balance of Kapha dosha. The imbalance of this dosha is associated with obesity due to excessive consumption of sweet foods.

When a person consumes too much food and his body becomes obese, the functional activity of the pancreas decreases because it can not process the sugar and the level of Kapha in the stomach increases. Then Kapha penetrates into other tissues, which is accompanied by the occurrence of symptoms such as frequent urination darkening of the urine.

Diabetes of the Kapha type has 10 subtypes, but the good news is that it is a type 2 diabetes, which is curable along with all of its subtypes, if found at an early stage.

Diabetes of the Pitta type

In this type of diabetes, increased levels of Pitta accumulate in the small intestine, then they move to the liver and pancreas and thus cause disturbances in their functions. Diabetes of the Pitta type has six subtypes, but it also belongs to the type 2 diabetes, so it is completely curable according to Ayurveda.

Diabetes of the Vata type

How do the methods for treatment of diabetes work?

In order to answer the question “Does Ayurveda treat diabetes and what methods it applies”, first we must talk about the Vedic science. According ti it, in order to be healthy, one must live in harmony with himself and nature, to have a balanced diet and to maintain the balance in his body, soul and mind.  Any imbalance, if not corrected, can lead to various diseases, including diabetes.

And diabetes occurs most often due to an imbalance of one of the Doshas, which occurs due to improper diet.

Therefore, before starting treatment for diabetes, patients must undergo a medical examination to determine the constitution and dosha, as well as the type of diabetes from which the patient suffers or shows symptoms.

Apart from the abovementioned factors, the physician considers the age, stage of the disease, lifestyle and eating habits, genetics, environment, and so on. 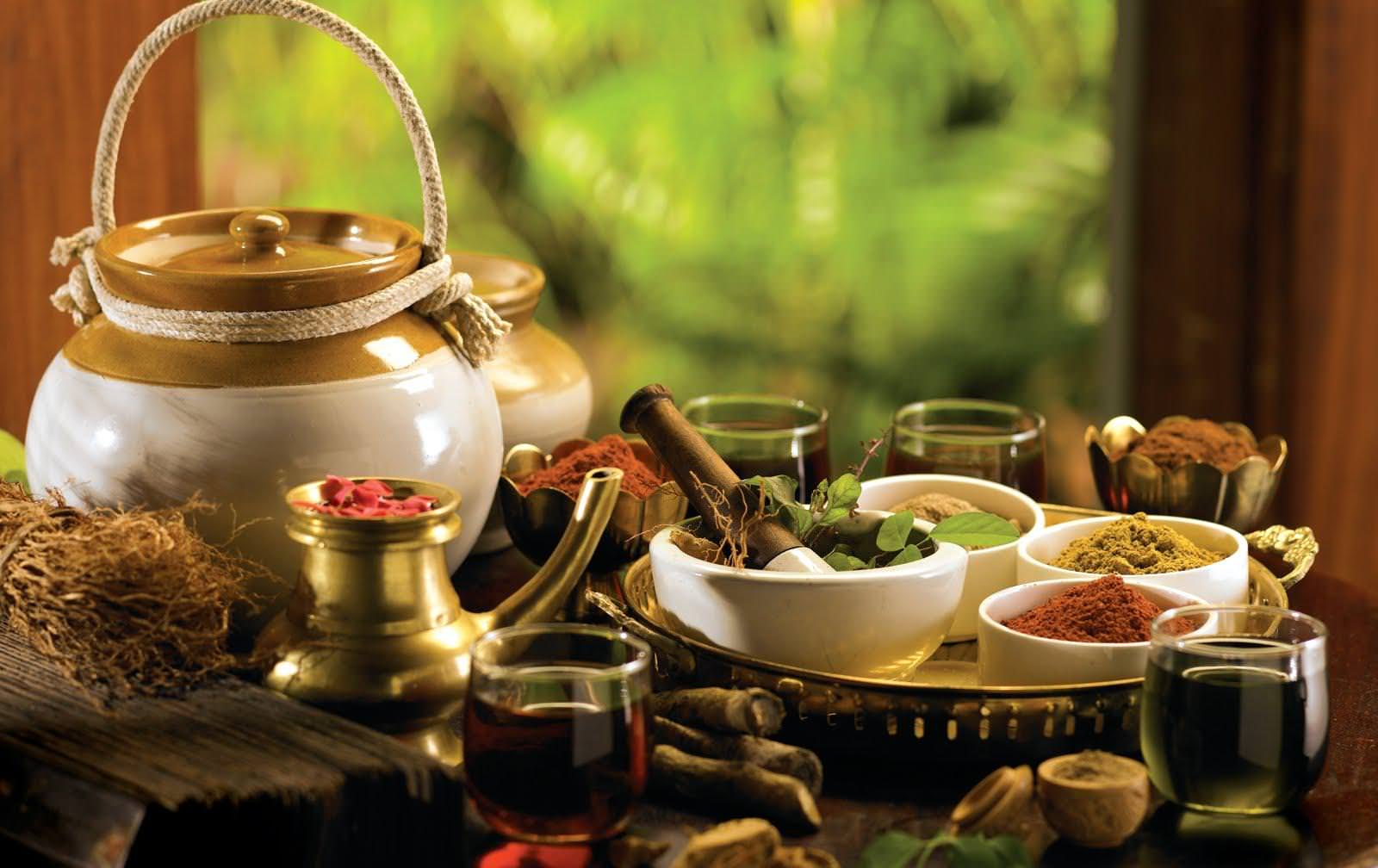 Ayurvedic methods for the treatment of diabetes

Diabetes, and especially type 2 diabetes, is most commonly associated with an imbalance of Kapha dosha and increase of Tamas and Rajas guna. The excess of Kapha leads to weight gain, and the increase of Tamas and Rajas guna cause laziness, lethargy, lack of desire for movement, which speeds up the process of obesity and hence the development of type 2 diabetes.

Therefore, the first thing that Ayurveda recommends as a powerful tool in the fight against this serious illness is balance of weight through a change in the eating habits.

Nutrition has played a key role in the treatment of diseases since the times of Krishna, where in XVII. 8 – 10 of Conversations with Bhagavadgita, food was described as an important factor in maintaining good physical and emotional health.

Switching to a balanced diet that excludes sweet, sour and salty foods is a must in order to reduce Kapha dosha and normalize the weight and blood sugar levels.

Foods such as cheese, yoghurt, cakes, white bread, rice, bananas, fruits that contain a lot of fructose, starchy foods clog the pancreatic channels, making it difficult for the pancreas to function and thus contribute to the accumulation of extra weight.

Instead of these foods, Ayurveda promotes the consumption of foods with bitter taste such as chicory, artichoke, as well as increase of the intake of fresh green leafy vegetables, whole grain bread, brown rice, spinach, garlic, onion, spices,  and Ayurvedic herbs such as turmeric, momordica, Aloe Vera, cinnamon, fenugreek, Indian ginseng, and so on.

These foods not only help to normalize the weight but also help the body to get rid of accumulated toxins, so the function of the pancreas can be improved and the normal blood sugar levels – resored.

The extract of this plant has been used by Ayurveda in the treatment of diabetes for more than 2000 years. The tree is common in Central and South India, and Ayurvedic healers mention it in ancient texts as „gurmar” or the „destroyer of sugar”.

Gymnema Sylvestre can be taken in many ways – by chewing the leaves, as pills or powders, or dissolved in water.

Studies on the efficacy of the healing plant in diabetic patients have shown that the plant stimulates the secretion of insulin, increases the effect of circulating insulin in the blood and reduces blood glucose levels.

Trigonella Foenum – graecum, better known as fenugreek, is grown all over the world. The seeds of the herb are used by Ayurveda in the treatment of diabetes, as the seeds are prepared as a drink or ground seeds are used as a spice to the dishes.

Fenugreek seeds have high content of fiber and also there are components in the herb that have a direct effect on lowering the blood sugar levels. Studies show that daily use of fenugreek can reduce insulin resistance and improve blood sugar control.

This aromatic herb has recently earned recognition even from modern medicine as an effective remedy for the treatment of diabetes. The spice lowers the blood sugar levels, stimulates insulin receptors and, most importantly, reduces elevated blood suagr levels after eating and stimulates weight loss.

Karela is widely used in the treatment of diabetes not only by Ayurveda, but also by other traditional healing systems. It is believed that Karela works to reduce glucose absorption from the intestines, it also stimulates insulin secretion and increases the glucose intake in muscle cells.

Amla is one of the most powerful herbs in Ayurveda, which has powerful antioxidant properties and acts extremely well on diabetic patients.

Moreover, this healin plant is rich in chromium, which regulates metabolism and helps break down carbohydrates and causes the organism to react to insulin, which further helps keep blood sugar within the normal range.

This is a very small part of the herbal remedies used in Ayurveda for the treatment of diabetes, and they effectively participate in the reversal process of type 2 diabetes, as well as they reduce the daily insulin doses in patients with type 1 diabetes.

There is a Vedic proverb that says: „The good union can do great deeds”. For the successful treatment of diabetes, apart from the herbal remedies and balanced diet, it is also very improtant the mind of the patient to be peaceful and the head – clear.

Participating in practices such as meditation and yoga helps to establish a balance between body, mind and spirit and has a beneficial effect on healing. Very often, once diabetic patients start practicing yoga and meditation, they notice that they unconsciously choose the right foods and watch out for the amounts of food they eat.

In addition, meditation and yoga reduce stress levels and thus play an important role in the development and control of diabetes. When we face situations that we perceive as stressful, our body increases the production of „stress” hormones such as cortisone and adrenaline.

Chronic stress may lead to insulin resistance, which in turn increases the blood sugar levels. With regular meditation and yoga practice, stress hormones levels decrease, resulting in better control of the disease.

So, can Ayurveda treat diabetes?

A study conducted in 2012 in Dev Sankriti, in which diabetic patients were involved for one year, has shown an effective reduction in blood sugar levels. Patients have been treated with the methods of Ayurveda, as they have changed their eating habits and used natural herbal remedies.

For one year, patients showed a decrease in HbA1c or the glycated hemoglobin by more than one point and a decrease in blood sugar levels at about 50 mg/dL.

We mentioned this study, but the truth is that similar and even better results can be achieved with Ayurvedic methods in the treatment of diabetes.

Unlike known methods of treatment, the methods applied by Ayurveda do not suppress the disease but they treat it. Of course, we are talking about type 2 diabetes at an early stage. Then the process is completely reversible, and the treatment is fully effective. In type 1 diabetes, the condition of the patient can be improved by maintaining the insulin levels but can not yet be fully healed.

And finally, the healing methods for the treatment of diabetes not only improve the condition of patients but also prevent other serious illnesses that usually accompany diabetes.

← Who is acclaimed as a God of the Medicine by those practicing Ayurveda? Failure to Gain Weight →