According to Ayurveda the human movements are accomplished through the Vata energy. This includes the transfer of nutrients to the cells through the blood circulation, the breathing, mental and emotional flow, nerve impulses, blinking and so on, and also the movement of the limbs and the whole body. Vata enables even unconscious movements such as tics, because it "rules" the brain and the nervous system.

Thus the other two Doshas – Kapha and Pitta, without Vata, could not manifest themselves as movements of the energy flows.  Therefore, the blockages of the movements – such as the disc herniation – are also related mostly to Vata.

Directly related to the back pain is one of the sub-types of this Dosha – Apana Vata, which is in the lower part of the stomach and legs. In general, however, the imbalances doesn’t affect only one Dosha – they are combined, and they may be caused by Vata, which is the most labile, as well by Kapha and Pitta.

When combined, these energy imbalances lead to complete disorders. This is the case also with the disc herniation. It is caused by the amortization of the intervertebral discs, which in turn is caused by disturbed energy balance. In this wearing out, the outer ring of the disc has been broken or cracked, the gelatinous nucleus of the disc has come out and begun to press a nerve. This leads to sharp pain and immobilization.

However, for the amortization of the disc, role may have the"water" Kapha – for the reduction of liquid in the gelatinous nucleus. If the "hot" Pitta increases much, it may burn fine energies and block Vata and Kapha.

The accumulation of energy imbalances is complicated, so the diagnosis have to be made by a qualified Ayurvedic physician. He will prescribe the proper treatment for balancing of the three Doshas in order the organism to restore its full functions and optimal health condition. 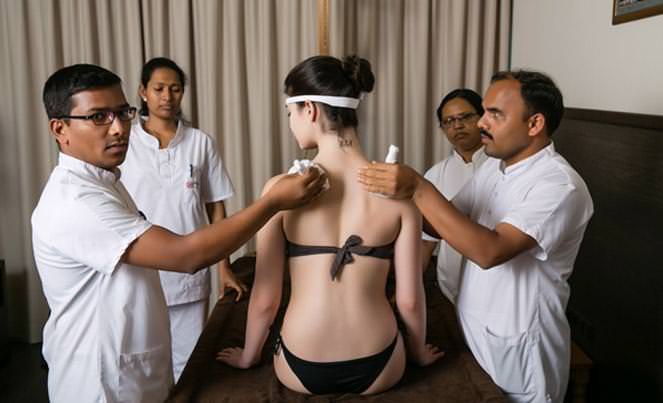 Ayurveda includes as an essential part of the disc herniation therapy various massages and treatment with healing oils and herbs. In general, the mechanical treatments stimulate different energy centers, and the oils and herbs have anti-inflammatory effect, they soothe the nerves and pain, help to remove toxins from the body.

Moreover, the blood circulation improves, the tissues get nourished – in the case: the intervertebral discs, which helps them to recover; the muscles are at ease and relaxed; the spasms and stiffness disappear, the body can experience again painless movements. There are both specialized ayurvedic treatments on the specific problematic body areas, and generally activating therapies for the organism which enhance its protective forces and functions, as well the self-regulating system.

The Marma therapy, for example, contributes to the overall stabilization of the body, the emotions and consciousness, it can balance all three Doshas, the energy channels are released and the immunity is enhanced. It is suitable not only for pain in the neck and back, for the disc herniation, but also for the complete healing of various diseases. This is because the marma points are affected – the energy centers in the body which "are managing" the movement of the vital energy.

For the disc herniation in the neck area and shoulders are applied  the Manya Vasti and Griva Pichu therapies, as the procedures are with duration of about 40 minutes per day, the patient is in horizontal position. The exact duration and how many days the healing process will last, should be determined by the ayurvedic physician.

When applying the Manya Vasti procedure, on the place which is to be treated, a “well” which is made of dough is placed, and in it through a thin stream the healing oil is poured. In Griva Pichu the oil is placed with a soaked compress.

The therapies should be combined with proper nutrition, according to the Dosha type and the deviations of the doshas that have to be balanced in order the energy balance to be restored; also they help the body to be cleansed from the toxins, as well yoga has to be practiced and daily regimen of the activities must be observed.

← How to make Ayurveda SPA at home? High body temperature →