AyurvedaSofia / Blog / How do we reduce our triglycerides to Ayurveda?

How do we reduce our triglycerides to Ayurveda?

We all know that bad cholesterol damages our body and is one of the main causes of cardiovascular disease, high blood pressure, a prerequisite for the onset of diabetes, and more, and more. We know that bad cholesterol is dangerous, but we don't think about triglycerides, which can also become very dangerous to our health if their levels are high.

Triglycerides and cholesterol – similarities and differences

Both cholesterol and triglycerides are fats (lipids). Both types of fat circulate in the blood, but perform different functions.

Triglycerides store excess calories that we ingest and store, so that they can later support our body when it needs extra energy.

Cholesterol is produced by the liver and our body uses it to perform various activities such as the synthesis of hormones, bile acid and more.

What is the connection between triglycerides and cholesterol?

According to Ayurveda, both triglycerides and cholesterol are very beneficial for our health and perform important functions, but in order to cope with their tasks they must be maintained within normal limits. However, when ama (toxins) accumulate in our body, it increases triglyceride levels, which in turn increases bad cholesterol, and this increase in both lipid levels has serious health effects.

How To Lower Triglycerides With Ayurveda? 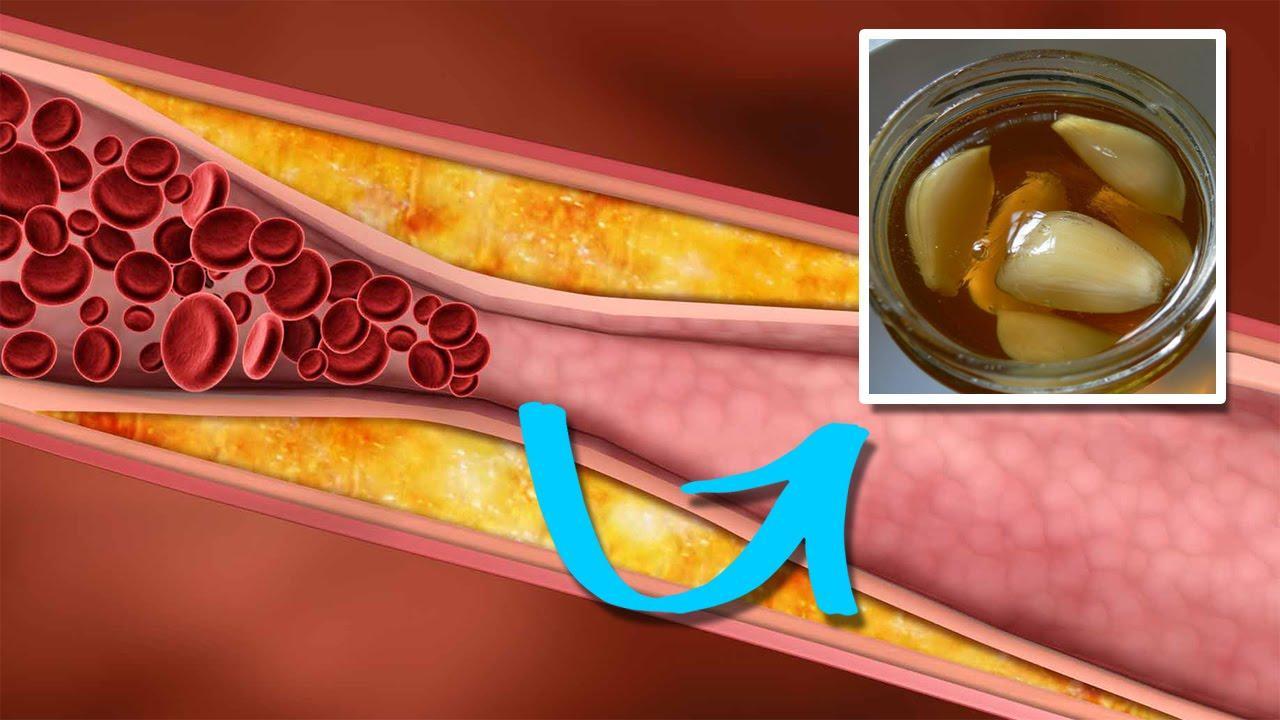 As the ancient holistic system of Ayurveda, it implements completely natural ways of reducing triglyceride levels that anyone can handle.

As one of the main causes of triglyceride elevation and bad cholesterol are obesity, lack of movement, consumption of bad foods and bad habits, all of which lead to the buildup of toxins in the body (well), the first step to lower triglycerides with Ayurveda is a change in lifestyle and diet.

Reduce the consumption of simple carbohydrates

The amount of triglycerides is increased by the consumption of simple carbohydrates such as desserts, sugar, refined and processed foods. Instead of these foods, Ayurveda advises to increase the intake of whole grains and legumes.

At least 30 minutes a day of walking, running, yoga or breathing exercises. Exercise will help reduce triglyceride levels in the bloodstream, and the body will burn excess calories, which in turn will lead to weight loss.

Minimize consumption of meat, processed foods, pasta, sodas, alcohol and other foods and products that contain high levels of cholesterol and increase weight.

Usually, people who have elevated triglyceride levels accumulate fat in the abdomen. If you have one, seek a specialist to perform  Ayurvedic diagnostics  and give you specific guidelines for lowering Ayurveda triglycerides to meet your dosha's needs.

Establishing a mode of eating and sleeping

Change in the way food is prepared

Ayurveda recommends that the food be cooked with ghee oil or olive oil and eat hot and fresh. Overheated food is harmful and helps to accumulate ama in the body.

It may seem strange to you, but honey fights successfully with elevated triglycerides and bad cholesterol. Apart from being rich in vitamins and minerals, the antioxidants it contains do not allow cholesterol to enter the mucous membrane of blood vessels.

A spoonful of honey dissolved in a glass of hot water will help normalize triglyceride levels and keep bad cholesterol normal. For even greater efficiency, you can also add 8 – 10 drops of apple cider vinegar or ½ teaspoon of lemon juice to the water.

For lowering triglycerides, Ayurveda strongly recommends the consumption of garlic. Garlic is rich in amino acids, vitamins, minerals and organic sulfate compoundssuch as allicin, azoic and other sulfur compounds, which are thought to underlie its therapeutic properties.

Grated or peeled, garlic can be added to dishes, applied as a dressing or drunk.

5 – 6 cloves of garlic are whitened and crushed well. 50 ml. organic cow's milk and 200 ml. water is boiling on the hob. After boiling the water, the garlic is added and the liquid is allowed to boil until the water is evaporated and about 50 ml is left. The garlic milk is filtered and drunk hot.

Amla is rich in Vitamin C, many minerals, and is an extremely good antioxidant. It is also an excellent natural hypoglycemic agent, strengthens the heart muscle and reduces excess cholesterol.

Consumption of one tablespoon of amla powder dissolved in warm water keeps the arteries clean and takes care of normalizing triglyceride levels.

It is a very powerful Ayurvedic herb that has the ability to dissolve cholesterol and keep the arteries clean. Arjuna is taken early in the morning and dissolved in water.

Another herb that helps lower triglycerides with Ayurveda. Guggulu contains guggulsterones, which are known to be active blockers of bad cholesterol in the blood. The Ayurveda herb can be taken after each meal and only 25 mg is sufficient to keep your triglycerides normal.

This vegetable is rich in antioxidants and helps reduce the risk of heart disease associated withhigh blood pressure and high cholesterol and triglyceride levels.

The celery can be eaten as a salad, added to dishes or drunk as juice. There is evidence that consumption of 2 stalks of celery a day lowers bad cholesterol by 7 points.

Avocados contain significant amounts of fiber and good fats such as oleic acid, which lowers unhealthy cholesterol and boosts good. Although avocado is very useful for maintaining normal triglyceride levels, it should be remembered that it is high in fat and should therefore be consumed fairly sparingly.

Green tea is rich in antioxidant compounds that can lower cholesterol levels and prevent the formation of blood clots. One glass of green tea has a lot more antioxidants than there are in vegetables and fruits, so Ayurveda recommends drinking green tea three times a day.

If you want to take care of your normal triglycerides, take the white rice with brown. Aside from the fact that brown rice has many minerals and vitamins, it also contains fiber, fiber and saturated fat, which helps to purify the body from toxins, to reduce weight, and most importantly, to balance cholesterol and triglycerides in the body.

These delicious fruits are rich in pectin and contain natural antioxidants, known as flavonoids, which lower cholesterol and keep the lungs and heart healthy.

An average apple contains large amounts of vitamins A and C, about 4 grams of fiber, and its calories are only 100. In addition to apples, Ayurveda recommends the consumption of pears, pomegranates, grapefruits, oranges to reduce triglycerides, which also reduce cholesterol.

Broccoli is rich in a variety of nutrients such as calcium, potassium, magnesium, vitamin C, fiber and fiber. In addition, they have antioxidant and anti-inflammatory properties.

When consumed with broccoli, the fibers contained in it bind to the bile acids that accumulate in the digestive tract and take them out of the body naturally. Broccoli thus helps to maintain normal triglyceride and cholesterol levels.

Barley is known for its ability to lower triglyceride levels and normalize blood sugar. The cereal contains a fiber called beta – glucan, which reduces cholesterol levels by 4 – 10%. In addition, barley is a very good substitute for wheat and you can eat it regularly as a substitute for bread.

Fish such as tuna, mackerel, trout, salmon, herring, sardines are loaded with Omega 3 acids, which have the ability to lower triglycerides and prevent heart disease. Ayurveda recommends eating fish at least twice a week and taking 1 – 4 grams of fish oil daily.

Its leaves contain cinnarine, which improves liver function. This leads to a fasterremoval of accumulated toxins and, consequently, to a reduction in cholesterol and loosening of the arteries.

Spinach contains lutein, which prevents triglycerides from sticking to the arterial walls and clogging them. Vitamin E, which is also contained in spinach, takes care of the removal of plaque and thus protects against heart disease.

Flax seed contains lignans that reduce blood cholesterol, stimulate the digestive tract and keep heart problems away. Flax seed is also rich in fiber and Omega 3 acids, which control the production and absorption of cholesterol.